Women are Essential to Peace… 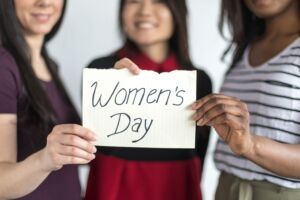 The United Nations has sponsored International Women’s Day since 1975. When adopting its resolution on the observance of International Women’s Day, the United Nations General Assembly cited the following reasons: “To recognize the fact that securing peace and social progress and the full enjoyment of human rights and fundamental freedoms require the active participation, equality and development of women; and to acknowledge the contribution of women to the strengthening of international peace and security.”

Women’s History Month celebrates women’s contributions to history, culture, and society in the United States since 1987. Women’s history is full of trailblazers in the fight for equality. Susan B. Anthony and Elizabeth Cady Stanton worked alongside many lesser-known suffragists, such as Marie Louise Bottineau Baldwin, Dr. Mabel Ping-Hua Lee, and Nina Otero-Warren. The latter women were crucial in the black suffragist movement who battled racism and discrimination while making crucial contributions in fighting for women’s right to vote.

With the rise of feminism, women are learning and obtaining more opportunities than before. From Nancy Pelosi becoming the first woman Speaker of the House to Kamala Harris elected the first woman to be Vice-President of the United States, American women have long fought for equal footing throughout the nation’s history.

The National Women’s History Alliance designates a yearly theme for Women’s History Month. The 2021 theme is a continuation of 2020s: “Valiant Women of the Vote: Refusing to Be Silenced.” This theme recognizes the battle for women’s suffrage, which was achieved with the passage of the 19th amendment in 1920. For almost 100 years, women had been fighting for the right to vote: They made speeches, signed petitions, staged demonstrations, and repeatedly argued that women, like men, deserved all the rights and responsibilities of citizenship.

Despite the passage of the 19th amendment and the decades-long contributions of Black women to achieve suffrage, poll taxes, local laws, and other restrictions continued to block women of color from voting. Black men and women also faced intimidation and often violent opposition when attempting to register or vote. Four years after the 19th Amendment was ratified, the passage of the Snyder Act (aka the Indian Citizenship Act) made Native Americans U.S. citizens for the first time. Mississippi formally ratified the 19th Amendment on March 22, 1984.

It would take more than 40 years for all women to achieve voting equality. The late US Justice Ruth Bader Ginsburg argued successfully in the Supreme Court in the late 1960s when she served as an advocate for the American Civil Liberties Union (ACLU) legal cases to ensure that the 14th Amendment’s guarantee of equal rights protection applied to gender.

I grew up in the ’60s and graduated from high school in 1967, initially believing that, as a young woman, I had all of the basic rights enjoyed by my male
counterparts. In 1966, the National Organization of Women was formed, and women’s rights groups focused on obtaining equal legal rights for women, primarily on how to change unfair laws in the workplace. In the ’60s, we saw a boom in the number of jobs available to young, single women, and more women went on to higher education, and in 1962 there were over 26,000 young women at universities.

Like many of my peers, at least in the middle class, I expected to have access to the same careers and achieve the same compensation as men. My first job while going to community college was with a lending company called Household Finance. At 18, I now learned that just because my parents and teachers had told me I could do and be anything I wanted to in life, that would not be the case as many jobs were “reserved for men only.” I worked for a company that had a policy that dictated that women could not become managers, load officers, or be in any high-level-decision-making role. I was told that I would only hold clerical and bookkeeping positions, and of course, those positions were only held by women, and we were referred to as Household Office Girls, “affectionately” known as a H.O.G.

I quickly became involved in women’s and civil rights efforts and became a whistleblower in a complaint filed with the federal government against several national companies that had practices that discriminated against women and minorities in the financial sector, including a practice we still have today called “redlining.”

After three years, the Federal Government did reach settlements with these companies in which they had to change their discriminatory practices, but the workplace did not change much until after RBH’s work in the 1970s and ’80s.

By the end of the 80s, women had moved beyond that, and we were entering professions in much larger numbers than had been previously exclusively held by men. There is a growing recognition that women in 2020’a are still marginalized from political and public life. In the past few years, we have seen this play out in
high-profile elections in the US and worldwide. Women are putting themselves forward for elections more and more, yet their numbers are still far behind men.

While there is much to celebrate, the 19th Amendment’s centennial anniversary also coincides with a major threat to the gains women have made in the workplace. The COVID-19 pandemic has had staggering economic and social impacts, hitting women particularly hard. Millions of women were already supporting themselves and their families on meager wages before the virus, but unemployment rates have skyrocketed, and millions of jobs disappeared. Working mothers were already shouldering most family caregiving responsibilities and are more frequently reducing their hours or leaving their jobs entirely in response. 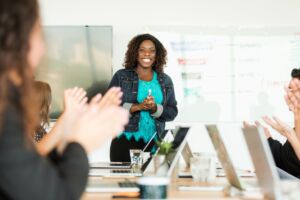 While the role of women in our economy has shifted over the last 100 years, our systems have not similarly evolved to support them. Solutions need to close the wage gap, improve working conditions and family leave options, and better align the childcare and school systems to meet the need of working parents so mothers who want to work can do so. Policy needs to reflect that women have fundamental roles in both the workplace and families and support women in those roles. We are long overdue in realigning our labor market policies, schools, and daycare system with the modern reality faced by work parents.

There have been thousands of women who, over the past 100 years, have defended the underdog, the disenfranchised, and the people viewed least important by society. They have fought for and protected our civil, social, and women’s rights. We will continue to seek justice for all and full enjoyment of human rights and fundamental freedoms. That is our contribution to the strengthening of international peace and security.