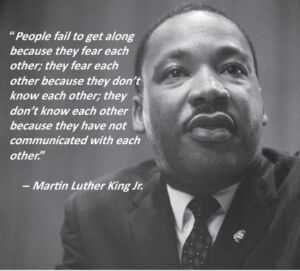 Dr. Martin Luther King Jr. would have turned 91 years old this year. Born on January 15, 1929, in Atlanta, Georgia. He would grow up to be known for his leadership and contribution during the American civil rights movement in the 1960s. His father and mother brought on Dr. King’s interest in activism. They instilled in their children the importance of standing up for themselves and others when facing racial animosity, oppression, and unfair discrimination.

Dr. King advocated for de-segregation and anti-racism in the United States. His most famous speech was his “I Have a Dream” speech he delivered in Washing- ton D.C. on August 28, 1963. It is important to note that Dr. King was a profound individual who continued to hold on to the hope that one day his children will live in a nation “where they will not be judged by the color of their skin but by their character.” While we have made some signs of progress as a country, there is still much work to do when treating everyone equally.

We want to take this moment to celebrate a man who continues to inspire people from all races and walks of life to do stand up against injustices and subjugation. He was an inspirational and courageous man who dedicated his life to bring peace and justice to others. It is important, now more than ever, that Dr. King’s efforts for racial justice be highlighted and celebrated. His legacy is one to honor and never to be underestimated or forgotten.