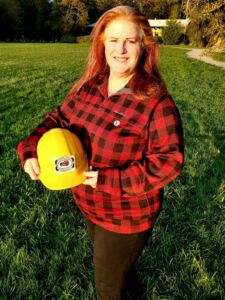 Imagine a book of inspiring stories about women leading interesting lives. A teenage girl working as a wireman for the local electric company.  A sheep shearer in New Zealand. A sailor living aboard a boat for seven years.

A woman who taught Bill Gates to use a technology program. A bee-keeper.  An engineering student who did poorly in her college classes yet became one of the first to switch from manual to electronic drafting.   A white-hat hacker.  A student at the bottom of her class at Pennisula College due to numerical dyslexia.

Now imagine that all the stories in the book were actually about one woman: Elizabeth Klute. Lis says her path seems more ordinary to her than it might to others; after all, her father could have been the inspiration for the movie “Big Fish”!

Lis didn’t even set out to be an emergency manager. She says, “I was hit in the face with disaster management often enough that I decided I really needed to think about making it my career.”

She’s noticed her experience isn’t unusual.  Some of the most effective emergency managers she’s worked with are people who fell into the field.  Like her, they often get their formal education in disasters mid-career or later.  (At age fifty, Lis earned her master’s degree in Disasters and Emergency Management from Coventry University in England.)

Lis notes that she has received some good advice over the years.  She was told the first rule of emergency management is that stress makes you stupid.  She wholeheartedly agrees.  A quote by Richard Bach, “To be where you want to be, act like you’re already there,” is also good guidance for building a career.

But Lis also knows it can be the smallest things that build or destroy good relationships.  In 2006, Lis was asked to become the first National Disaster Director of Anguilla in the British West Indies.  She needed to adapt to a new culture.  Her staff always said to start a conversation in the Caribbean with “good morning,” “good afternoon,” or “good evening.” She saw the difference the simple habit made. But as host of a large conference in the region, no one told her that protocol required she specifically welcome a long list of people in a particular order.  To her staff, it was obvious, and no one bothered to state the obvious.  Lis could tell something was wrong as soon as she sat down from her general welcome speech.  She learned that day how much protocol matters.  She thinks part of being a good disaster manager is working to discover “how we do things around here” in a new environment.

Lis has come full circle – ending up back near her hometown, serving as Director of Emergency Services for Kitsap County.  She knows her future replacement could well be sitting in an auto mechanics class today, working as a bartender, or delivering mail.  There may not be a straight-line path from where they are now to replacing Lis one day.  But, after all, the current occupant of the job didn’t get there in a straightforward way, either!