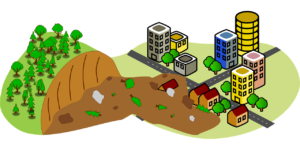 The 1446-1447 AD Bonneville Landslide (also known as The Bridge of the Gods Landslide) blocks Columbia River where the river bisects the Cascade Range near present day Cascade Locks. The southern escarpment of Table Mountain in Washington State slid, releasing 5-6 square miles of debris up to 400 feet thick into the river. The resulting 300 foot deep lake backed up 170 miles back to present day Tri Cities. It was mostly eroded by 1690, but the Cascade Rapids and Celilo Falls marked the spot. How are we able to estimate the magnitude of the fault slippage, date, and devastation without modern seismic data? Indigenous knowledge and geo-forensics provided clues.

“Bridge of The Gods Landslide” on YouTube features Central Washington University’s geologist, Nick Zentner’s lecture on the slide. He quotes various people and evidence to date the slide, explaining how it affected the river and when the river started flowing again.

• Lewis and Clark journals from 1805 provided some clues from their canoe portage around Celilo Falls and the Cascade Rapids on the Columbia. They called it “The Greatest Mart of the West” and noted indigenous people came to trade there. The area was a gathering place to fish the annual salmon runs. They also noted partially submerged ghost tree stumps were created when the backed up water poisoned living trees, leaving dead and dying timber stands.
• Donald and Elizabeth Laurence (biologists) in 1930s surveyed 4,006 ghost trees and collected samples before the Bonneville dam submerged them
and the rapids in 1938. Carbon-14 analysis was used to place the slide about 700 years before as described by John Allen in “Time Travel in Oregon”.
• Jim O’Connor’s (USGS Research Geologist specializing in Pacific NW floods) evidence dated one outburst flood event from the landslide by locating
downstream geologic rubble that had Mt. St. Helens eruption ash on top of it from 1490. The conference paper from GSA Connects in 2021 had O’Connor
as co-author, Tree-Ring Dating of the Bonneville Landslide to Late 1446 or Early 1447CE.
• Chris Goldfinger is an underwater specialist in turbidities landslides. “T2” is an underwater landslide found along the full length of the Cascadia offshore in the Pacific Ocean on the Juan de Fuca Plate. Evidence of this Cascadia Subduction Earthquake shows T2 occurred 1456AD +-50 years estimated at 8.7 magnitude. It is unknown if this contributed to the Bonneville Landslide.

WA Department of Natural Resources (DNR) statistics list our state as one of the most landslide-prone states in the U.S. with 100s to 1000s each year. The following DNR site has many fact sheets to educate readers about this topic.
https://www.dnr.wa.gov/programs-and-services/geology/geologic-hazards/landslides#resources

After the Wildfire – Recovery and Reclamation of Land Tips

As the population builds out into rural areas, the chances of wildfire impacting your life increases. The severity of the fire impacts not only the vegetation we see, but the soil structure and microbial community beneath. Slopes damaged by wildfire are prone to accelerated soil erosion, floods, and landslides (debris flow) from damaged vegetation and roots that protected the soil.

Evaluation of burn conditions on the land after a fire often uses 3 definitions to describe how the soil and vegetation was affected.
• Burn intensity is flame height, rate of spread, fuel load, thermal potential, canopy consumption, and tree mortality.
• Soil burn severity takes into consideration lack of ground cover, loss of raindrop interception by canopy cover, loss of organic matter and soil structure
integrity.
• Hydrophobic Soil is the degree soil will absorb moisture.) Pour a cup of water on the soil. If the water beads up, the soil has been affected in that area. The temperature, duration, type of organic matter in the area produce organic chemical during combustion up to a depth of 6 inches. These substances condense and coat the soil particles making them hydrophobic.

To Test: Drop water on soil surface and observe time to infiltrate soil. Trench and test down a shallow trench to see degree soil was affected.
Slight: Less than 10 seconds.
Moderate: Between 10 to 40 seconds.
Strong: Greater than 40 seconds.