Wizard of Oz: Leadership with Sincerity

John Lewis, the U.S. Congressman from Atlanta, Georgia, sadly died on July 17, 2020 after a long battle with pancreatic cancer. Lewis was a civil rights activist who marched with Dr. Martin Luther King Jr. in the1960s for equality, justice, and peace. 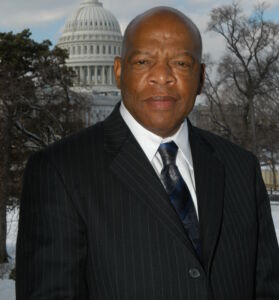 Throughout his life, Lewis maintained a strong loyalty to his principles of non-violence and adhered to the belief in the power of love, decency, tolerance, inclusion, and integration. He challenged us all to be the best we can and to do what is right. His leadership will be seriously missed but never forgotten. We all have the challenge of continuing to carry on the life’s work of Congressman Lewis.

The Center of Excellence honors and dedicates our July 2020 issue of Confluence to the memory of Congressman John Lewis. His leadership is the kind we need right now. What we all need to understand is that is it important to believe in our abilities to stand up and lead others with sincerity, empathy, and compassion.

We need leaders who can lead with their hearts and heads, along with inspiring others to do the same. A good leader looks after others and does not solely prioritize outcomes and goals that affects them personally and/or professionally.

“John had a tremendous appeal to people,” said Bernard LaFayette, college roommate of Lewis and friends at the American Baptist Theological Seminary. According to LaFayette, Lewis’ leadership qualities were natural, which began at an early age. It often made him stand out ahead of classmates who were older. LaFayette said that John was the type of person to naturally draw people to him and that “he didn’t go out of his way to do that.  He was quiet, in terms of his spokesman-ship, but people had confidence that he had a sincerity.” LaFayette also added that Lewis had no arrogance when it came to leadership. “He never put anybody else down. He had respect. People had confidence in him in terms of his leadership. That’s the thing that made the difference.”

Back in June of this year, Lewis spoke about Black Lives Matter and shared how he had “been down this road before”, but that he still had hope. He told NBC News, “As a nation, and as a people, we’re going to get there. We’re going to make it. We’re going to survive and there will be no turning back.”

In 1939, the movie “The Wizard of Oz”, one of the best and most beloved movies of all time, was released in theaters. Just a year before Lewis was born. The movies, based on L. Frank Baum’s book, which was published in 1900, was so well crafted that it continues to enchant audiences to this day and also offers some important leadership lessons which also is the legacy left for us by Congressman John Lewis.

Lesson #1:  Head, Heart, Courage, and Spirit are cornerstones of character. One of the reasons that Wizard of Oz endures is because it resonates in our experience of the human condition. We recognize that to be our best as a human, or team, or leader, we must draw from head, heart, courage, and spirit. Not one of these are complete and our endeavors are interdependent.  Leaders in today’s world are those who should have these characteristic:  wisdom, humanity, courage, and resilience and who recognize their limitations.

Lesson #2: “Face adversity and keep their people moving forward took on the realities of their situation head on and they emerged from adversity even stronger.” – Jim Collins.  Good leaders always stay true to their values and mission, and always expect and give help along the way.

Lesson #3:  They are authentic and know who they really are and provide genuine help which connects, engages, and sustains people.

Lesson #4:  Good leaders can foster change by reframing how the world looks to people. With the right frame, doors that seemed closed are open, paths appear

in the wilderness, and people suddenly possess what seemed out of reach. Leaders help people produce positive outcomes.

Lesson #5:  No one else can do it for you.  At the end of the movie Glinda the Good Witch informs Dorothy she has always had the power to go home. “Why didn’t you tell me?” Dorothy asks.  “Because you had to find out for yourself.” Leadership is one of them. Reflection on experience in a way that informs to handle future experiences is the fundamental key to development. Leadership is a development process. Help along the way is essential (mentoring and coaching), but no one else can develop it for you.

Lesson #6:  Nothing in the world can take the place of determination and persistence. “One cannot teach a person anything. One can only enable him/her to learn from within himself” – Galileo. You are braver than you believe, and stronger than you seem, and smarter than you think” – Milne. Make the commitment to act with confidence and determination.

Lesson #7:  Lead through participative leadership which is relationship oriented and enables you to achieve your goals and implement change. The benefits of participatory leadership mean that people develop greater decision-making skills which leads to more quality decisions that have a higher level of acceptance and satisfaction by all involved.

Lesson #8:  Think critically. Highly reflective thinking develops into Wisdom. It’s “contemplating” and listening to others which is an important part of gaining wisdom.

Leadership is a journey down that “Yellow Brick Road”. A successful leader depends upon a belief in oneself, having a goal for a better future, wisdom, emotional intelligence, and a willingness to Act. This journey will be filled with difficulties and obstacles so reflect and gain perspective on Your Journey. Remember “some things you just have to experience yourself” stay determined, courageous and persist.