Disasters bring consequences, both immediate and long term. Yet they also provide opportunities to address obvious hazards, so that they do not repeat themselves time and again. And such events can provide reminders to policy and decision makers even when their jurisdictions are far removed from the location of the disaster.

The recent hurricane disasters have created consequences for many years that may or may not be effectively confronted as the long recovery cycle gets underway.

The challenge for Texas will be how much mitigation to impose and whether to even return to some demonstrably vulnerable areas. Very likely there will be strong momentum by Texas decision makers to just put things back pre-Harvey: with subdivisions that are still at risk during the future storms, and a population that will continue to be dependent upon luck instead of thoughtful planning for its safety.

Florida is very unlikely to face the reality that the encroachment of the sea on their lands will not stop; the failure of their elected leadership to address the predicable negative consequences for coastal areas suggests another similar disaster lies ahead. Again, mitigation may take a back seat to political expediency. 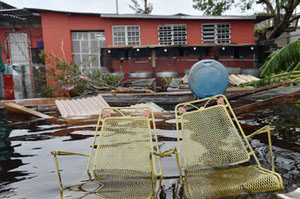 In Puerto Rico, Maria destroyed an aging and maintenance deprived infrastructure. Compounding the problem, a presidential visit descended to the equivalent of stunts more reminiscent of the eighth inning of a minor league baseball game (when sweatshirts or other swag are tossed into the crowd, in Puerto Rico, it was paper towels). An unintended consequence of that moment was to trivialize Puerto Rico’s tragedy: to add further insult to injury, diminishing the impact of the disaster by comparing Puerto Rico’s “body count” to the number of lives lost in Hurricane Katrina displayed a tone deafness that obscures FEMA’s mission and calls the federal government’s commitment to American citizens of that island into serious question.

The recovery in Puerto Rico, as in Texas and Florida, should involve a thorough assessment of how best to harden critical infrastructure, housing and intelligently renew the economy. Will it?

Elected officials in Washington State may not recognize that they could easily be glimpsing their own future as they watch their counterparts in other places try to cope with the aftermath of a major disaster. The lessons of the past several weeks should not be lost in Washington State: on the day of our big event, all that will matter is what we have done in advance to minimize the consequences. In the days after, it will also matter what should have been done to prepare. And some in authority may have much to answer for. Earthquakes, while sudden, should not be a surprise. No elected official will escape the question “what did you know, when did you know it, and what did you do…”

One wonders if any elected officials in Washington State at present have an answer they would look forward to providing.