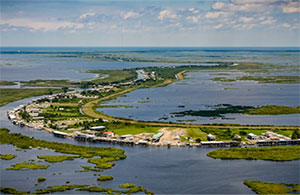 The Governor of Louisiana recently declared coastal land loss as an emergency, calling for the federal government to assist in restoration efforts. The update I read suggested his intent in declaring an emergency was in part to “pressure” the President and Congress to reexamine the possibility of increasing investment in and attention to coastal restoration.

If that declaration of emergency prompted any action, or even a notable reaction by the Administration and Congress, I certainly missed it. What struck me as an interesting topic was the pretty undeniable fact that the gradual loss of coastal lands is indeed an emergency. The question becomes whose emergency is it?

Climate change denial is in the ascendancy among the Congressional majorities in the House and Senate, and is even more intensely apparent in the reaction of the White House, which responds to the notion of climate change the way Count Dracula might react to a crucifix or a mirror. In a number of state governments using the term “climate change” is a good way to be disciplined or even terminated. This has forced the use of other terms of art that have not yet been banned: I give you “emerging extreme weather events” or “extreme sea level rise”.

But what terms we use, or not, are hardly the point. The impact of the loss of coastal lands transcends such juvenile attempts to minimize its significance. This is a national defense and homeland security issue. How so? Pronouncements from the Pentagon suggest that a number of the nation’s military bases, such as the Navy’s facility in Norfolk, Virginia, are threatened by the more than theoretical “rising sea levels” and the consequent encroachment on the nation’s coastline. The bill for shoring up those areas, or for moving those bases and uprooting the surrounding population served by those bases will be enormous. 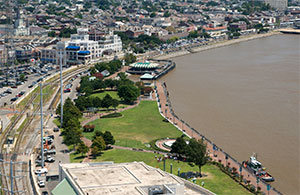 And there is this: as conditions worsen around the world, as island nations begin to disappear and the coastlines of other nations experience the same stresses our coastal populations can expect, a very dangerous byproduct will be the displacement of populations from areas that once supported them to areas that are either not ready, or unwilling, to accommodate and absorb their forced evacuation.

The decision by the President to begin the US government’s withdrawal from the Paris climate accords over the next three years offers little hope that thoughtful planning and preparation for the impending crisis will be led by the federal government. Instead, leadership is coming from elsewhere. States like Washington and California are stepping up to fill that leadership void on this critical issue. But on a national level the opportunities to minimize the negative consequences of a clearly looming crisis are being missed as priorities and resources are aimed at more dubious priorities.

In 2019 the President’s budget is likely to draw funding away from local and state emergency management and push more of it toward funding “security” on our Southern border. Rather than adding climate change impact planning to the emergency management portfolio, it is likely that it will be necessary to fight to merely sustain the current level of effort of existing programs.

Until the day comes when the federal government acknowledges that the dangers associated with our changing climate, and mankind’s obvious role, emergency managers may have to shoulder the brunt of the responsibility for promoting high level policy discussions on the impacts of climate change.

The tilt toward “border security” over other issues is reminiscent of the scramble to provide funds after 9/11 to appear to be emphasizing counter-terrorism programs, to the virtual exclusion of natural hazard priorities. There will eventually be debate, likely inconclusive and on partisan lines, on the impact climate change has had with respect to Hurricane Harvey, and possibly Irma. Emergency response challenges for Harvey, and the next one (Irma?), will be made more difficult because of the failure to get the message Nature keeps sending, and the Governor of Louisiana attempted to relay with no discernible evidence that anyone is listening.