by hsem
Comments are off

How to Prepare for an Emergency – Extreme Weather

Washington natives are well-versed in being prepared for the climate of the Pacific Northwest, but significant weather deserves additional safety measures. The Pacific Northwest annually receives the least amount of thunderstorm days compared to any other region of the country, so we sometimes get lulled into a false sense of security. Thunderstorms are the most dangerous weather scenario that people are likely to encounter frequently, and can either form rapidly within your local area or be carried in with the prevailing winds. Preparation now can prevent a bad day from becoming worse.

There are 3 basic phases in the life-cycle of a thunderstorm, and the various hazards a thunderstorm can produce are present at different times. 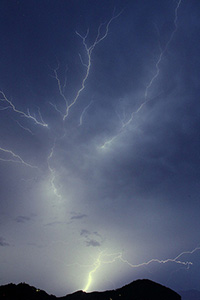 Lightning is typically the first feature you will see outdoors that indicates weather is going from “Everyday Overcast” to “Potentially Messy.” If you count the seconds between a lightning flash and the rumble of thunder, each second equals 1 mile of distance between you and the lightning bolt. (For example, 4 seconds between flash & rumble means that lightning struck ~4 miles away from you.)

Lightning Warnings issued by the Department of Commerce agencies (NOAA & National Weather Service) and the Department of Defense agencies (US Air Force and US Navy) mean that lightning has already struck within 5 miles of a given area at least once within the last 15 minutes. They remain in effect until 15 minutes of lightning/thunder-free time has elapsed.

If watching a weather report on television, over the Internet, or listening by radio: Pay attention to where storms are reported, and which way they are moving. Lightning CAN potentially strike as far out as 50 miles from the storm cloud itself, in any direction!

Storm systems are always associated with a change in wind direction, as well as an increase in wind speeds for a period of several hours. The rough terrain of the Puget Sound area is unfavorable ground for tornadoes and/or waterspouts to develop, but so-called “Straightline Winds” are actually enhanced by our environment.

People should make every effort to avoid being outdoors during High Wind activity due to the difficulty of traveling on foot as well as the potential for loose debris to be blown around & cause damage or injury. 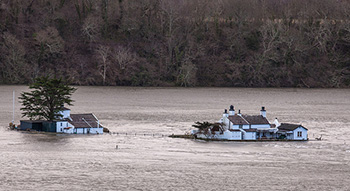 Thunderstorms are often accompanied by significant rainfall within a period of 1-3 hours. During the heaviest showers, visibility can be reduced to ranges experienced during morning fog events.

Driving during heavy rain requires more vigilance, as roads become slick and dangerous (hydroplaning). Drivers will often drive slower as visibility makes it harder to navigate through city streets and traffic will become a problem.

Low-lying areas may temporarily flood as storm drains get blocked with debris. Nearby rivers may slowly rise and flood as well; monitor local reports for any updates or warnings. (For more information on flood protection while driving, click here.)

Thunderstorms with intense vertical winds as well as horizontal winds can produce hailstones. Smaller hailstones can be ejected from thunderstorms 10-15 miles away from the cloud itself, while heavier stones fall directly down from the cloud. Any hailstone 0.75 inches (2cm) or larger is considered capable of causing injury to people and animals or damage to property.

Winter storms and blizzards can result in a variety of hazards and require extensive use of state and local resources. According to the National Oceanic and Atmospheric Administration (NOAA), winter storms can be accompanied by strong winds creating blizzard conditions with blinding wind-driven snow, severe drifting, and dangerous wind chill. Winter hazards can cause injuries or deaths and property destruction or damage. Winter hazards also can stop the flow of critical resources to a region, disrupt emergency and medical services, and severely impact the delivery of other essential services for days or weeks.

Winter snow can grind the whole city to a halt, shut down transportation systems, and put demands on the power systems. During these types of storms, accidents rise among those who try to drive and can trap people at home or work.

A Blizzard Warning means that large amounts of falling or blowing snow and sustained winds of at least 35 miles per hour are expected for several hours.

In a Car or Truck

In extreme cold or in heavy snow, stay with your car until you can be rescued. Run the motor about ten minutes each hour for heat. Open the window a little for fresh air to avoid carbon monoxide poisoning. Make sure the exhaust pipe is not blocked, which would cause dangerous fumes to backup inside the car.

Make yourself visible to rescuers. Tie a bright cloth to your antenna or door to alert rescuers. Turn on your dome light, at night, when running the engine. Raise the hood indicating trouble after snow stops falling. Exercise from time to time by vigorously moving arms, legs, fingers and toes to keep blood circulating and to keep warm.