Maybe We Should Take Our Issues To Jared? – Emergency Management, Once Removed, May, 2017

Maybe We Should Take Our Issues To Jared?

It’s sometimes difficult to see too far into the future, particularly when we seem locked perpetually into an uncertain present. While we await the direction the Trump Administration will take in homeland security and emergency management, there are questions and concerns that like it or not, are “out there.” Worse yet (see title) we are not certain whom to ask.

Will the primary DHS budget emphasis be on adding more agents to augment “deportation” forces? Will efforts to redirect federal spending priorities to border security dilute funding of programs like Emergency Management Performance Grants (EMPG), the National Earthquake Hazard Reduction program (NEHRP), Pre Disaster Mitigation (PDM) among others?. Will these be collateral damage as the new priorities take shape?

Who will be nominated to the new FEMA Administrator? Who will decide that? Who will staff FEMA’s political slots, in particular the new Regional Administrators (Note: some RA positions are career posts)? Who will actually choose them and vet their competence? Will it even matter if all they are permitted to do is preside over the demise of programs and respond/react as best they can to disasters with the resources available? What will be the relationship between the leadership of the Department of Homeland Security (DHS) and FEMA, and, will that even matter in this Administration? How much authority will the DHS secretary exercise over FEMA operations? Questions, questions, questions…

As I noted last month, it remains possible that there are enough people in Congress to fight for EMPG, NEHRP, PDM, etc. Given the swirl of toxic exchanges within Congress, one cannot really expect that too many members of Congress will “die on the hill” of emergency management without serious pressure to do so. 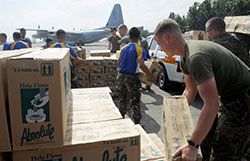 Will foreign affairs crises change the budget and national political discussion so radically that domestic emergency management issues fade? When missiles are flying, and task forces are steaming into potentially world-changing conflict (or not!), not to mention investigations into the integrity of American elections, successfully focusing Congress on subjects we in emergency management take seriously might be a heavy lift.

During the Cuban Missile Crisis in 1962, I was a high school sophomore practicing JV football, going to classes, and watching news specials at night. I admit that I wondered why I was studying for tests, running laps and practicing tackling with the world so close to self-destruction. But, I did study (a little), maintained my conditioning and improved my tackling a bit, and that was a good thing because the world went on and there was still a “future” in my future, post – crisis.

No matter how distracting the national and international chaos currently is, one day, perhaps very suddenly, emergency management will be very important once again. Emergency managers will still have a future to prepare for. We need to keep training, exercising and planning and our elected leaders still need educating whether they realize it or not.

This is certain: disasters will still happen. The community will still expect help. Emergency managers have to be focused on making sure they can take the lead in assuring that assistance will be provided when and where needed. It may not be necessary, or wise, to continually obsess over the worst case event – any crisis that is not handled well is problematic enough. Despair over what cannot be controlled from our vantage point won’t yield a better future; focusing on strengthening our capabilities is our better option. Asking “Jared” will not answer our most important questions. We should be addressing questions about our readiness to ourselves, and fix what is in our power to fix.