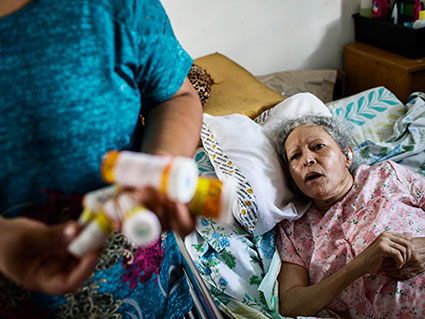 Emergency managers’ usefulness to society at large accrues for their ability to quickly address problems before they get worse, recognizing that not every problem needs to become insurmountable. Of course, major incidents are not always preventable, but even after the fact lapses in attentiveness can make a massive problem considerably worse.

A recent experience of mine highlighted this concept.

I’d just turned 71 years of age. It started with a small, annoying cold. Protracted sneezing, nasal congestion, post nasal drip, sore throat. Rather than abating with routine treatment, soon there was congestion in my chest, increasing and seemingly incessant coughing, and the inability to find a way to sleep more than a few minutes at a time – still it was warm in our house, I had blankets, food, and access to cold and chest congestion remedies although we had to supplement that early on.

Within a few days, things got much worse – it became difficult to lie down or stand up comfortably, and the notion of a decent period for a nap, let alone a good night’s sleep, made for a miserable weekend.

On Monday, after several days of this, I called my doctor and received immediate attention: office visit, chest x-ray (they call it imaging now). I was diagnosed with pneumonia, was sent home under a form of “house arrest” where I remained for about 10 days. Then all was well.

But, I live in Seattle, Washington where there was no hurricane or earthquake to disrupt normal operations. My health care access remained intact. The power was on, so my symptoms did not accelerate due to cold; the phone lines worked, so there was no fear of isolation if I took a turn for the worse. The transportation system in Seattle, although miserable on its best days because of years of negligence by city officials, still was more than adequate for me to access necessary medical attention as needed. So, this will soon pass.

But, as I was lying in bed, listening to the renewed debate about the number of deaths caused by Hurricane Maria in Puerto Rico, I began to wonder what might have been for a fellow American, also aged 71, living in the hills outside the major cities of Puerto Rico immediately following the hurricane. He, too, might have tried to power through the initial stages of his oncoming disease, given the carnage all around him. Without access to clean water, and power, how long would it have taken for my early stage of pneumonia to deteriorate? Medical services, such as were operational, were overwhelmed. If he was fortunate, perhaps someone would have driven him many miles while he coughed and spit and tried to clear his sinuses – tissue supplies were also probably exhausted by now.

Surrounded by potential infection hazards, who knows how my five to seven days of extreme discomfort in Seattle may have translated to a similar period in Puerto Rico?

For me, the fallout from my illness was to have to cancel attending a professional meeting. For someone in Puerto Rico in 2017, the abrupt and unnecessary end of one’s life might have been the result. Emergency response should always include emphasis on not just the areas where pleas for help can be heard, but on the areas that are silent. And paper towels can’t wipe away the stain failure to do that leaves.