Dealing with Climate Change – It’s On Us – Emergency Management, Once Removed, November, 2015

Dealing with Climate Change – It’s On Us – Emergency Management, Once Removed (2) 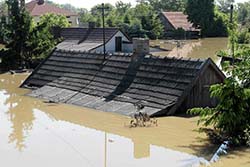 I recently attended the National Emergency Management Association (NEMA) annual forum in Miami. The search for an acceptable way to address climate change among the nation’s state directors of emergency management (climate adaptation, ‘natural” climatic events are among the alternatives one hears), the urgency that we as a nation do something, and soon, continues to mount. I was only half-joking when I observed at the Miami conference that I wanted to see Miami while it is still there.

Emergency management is a consequence management function; and it will fall to state and local emergency managers to manage whatever befalls their respective jurisdictions. Climate change denial has to be combated at the ballot box, since overwhelming scientific conclusions are apparently not persuasive.

However, whatever the cause of the changes we are seeing in weather patterns, sea level rise, increasingly devastating storms and other phenomena, even most “deniers” acknowledge that there are changes occurring that require our attention. And that is where planning for the alterations in climatic patterns that are occurring comes in. These changes present hazards to our communities: they need to be acknowledged as hazards and planned for. Government cannot render an edict banning flooding, or massive storms, or intense drought situations, but it can plan to adjust and adapt. In my time as Washington State Director there were two major flood disasters in back to back years, with landslides and significant road closures and loss of power that proved to be very disruptive to our citizens and poor economy. After the second event, a senior planner for the Governor informed several of us that the Governor had said that there were not to be any more of these events: I asked if that was a joke, and was told that it was not. I replied that this means that if we do not change our behavior in terms of where we want people to live then we had better invest substantial state monies in extensive mitigation of homes, business and transportation arteries.

What that Senior Planner was actually doing was palming off the responsibility for preventing the negative consequences of the next natural disaster on state agencies without targeting the investment of state funds to mitigation, without engaging the general public in a candid discussion of risks our present policies have created. It was disheartening, but not entirely unexpected. One of the reasons governments experience such problems is because they are always looking backward or around for present day items to deal with – they respond fairly well to an immediate crisis but the long term considerations of what might happen next elude most elected officials and their staff. They wait for someone else to step up.

Of course, the primary source for investment in mitigation has historically been the hazard mitigation dollars that the federal government provides months after a Presidential declared disaster. There exists also a pre disaster mitigation program that is continually on life support, and because it is a competitive program, creates more losers than winners when the dollars are handed out by the feds.That is not enough. The impacts of climate change are local and statewide as well as national. Our state has leadership at all levels that is enlightened on this subject- no one need fear for their job for describing climate change for what it is, a human-caused crisis. What must occur is a comprehensive plan that is adequately resourced to either a) determine a path to minimize the impacts, or b) describe the best alternatives in terms of coping with the continuing hazard. Deliberately or not, that senior planner’s response conveyed that somehow state government needed to find a way to forestall unwelcome natural disaster impacts without investing in mitigation, without having that difficult public discussion about risk, priorities, investments and human behavior. Good luck with that “courageous” approach.

The answers may not lie in Congress, or in gatherings of the nation’s state directors of emergency management. It may well rest in our hands, in this state, and in other states to demonstrate our commitment to reversing the shift in climate. And the force of that effort may well lift national policy back into a fact-based reality.